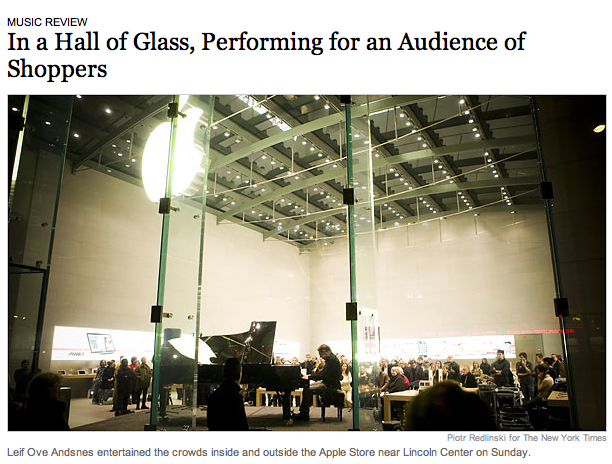 In November 2009, New York’s classiest Apple Store opened at 67th and Broadway. Because of the store’s proximity to Lincoln Center, Apple’s retail marketing team were keen to use it as a venue to cement Apple’s relationship with the arts world.

This was the first Apple Store in New York to accommodate a Steinway D*, so this seemed like an excellent opportunity for some serious piano music.

Working with EMI Classics, I arranged for Leif Ove Andsnes to give the first performance at the store. We arranged the show after closing time so the store would be quiet, but Leif was playing in the window, so despite the cold, crowds gathered in the snow outside. We let people in between movements so nobody would freeze. The concert was recorded for release on iTunes. Media coverage included the front page of the New York Times arts section.

* There’s space for a Steinway D on the stage in the Soho store, but it won’t fit in the elevator, and the architects wouldn’t let me carry it up the glass staircase. I might have got away with it if I hadn’t asked first.